June 6, 1944, 67 years ago, an eternity to most people, American, British and Canadian troops landed on the beaches of Normandy and across the French countryside to literally, liberate Europe from Nazi occupation. Part of Operation Overlord, the naval operations code named Operation Neptune, included 1,213 naval warships from the United States, Britain, Canada and to a lesser extent, the Netherlands, Poland, Norway, Greece and France, all navies in exile. In addition, 4,126 landing and other craft were provided and 3,500 used in the greatest sea 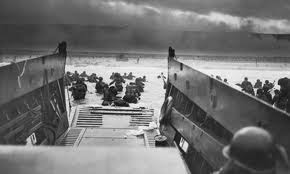 invasion in history. The navy did more than simply provide transportation of men and material, it provided (at times close in) bombardment of heavily defended German positions, underwater demolition teams, minesweeping, anti-aircraft fire, anti-submarine patrol, corpsmen and critical evacuation under heavy fire of the wounded.

The total casualties during D-Day and the few critical days after will never been truly known on either side. It is generally recognized there were 6,036 American casualties during the battle of which 4,900 died, including 1,068 US Navy sailors, not a well known fact. Again, there remains academic dispute on the exact casualty figures. No matter, thousands died in the name of freedom and the liberation of a continent.

One has to wonder, looking at the high casualty numbers within a short period of time, and the absolute horror and carnage we all think we have some understanding of due to the movie “Saving Private Ryan”, one has to wonder, how would the media treat this today? What politicians would demand an investigation, what politicians would summons the head of the Joint Chiefs before a well-publicized Senate committee, and what groups and organizations would scream for an immediate withdrawal?

We live in a different world, sometimes a better world, sometimes not. Do not let that stand in the way of remembering and honoring the men who sacrificed all to save the world. So today we remember, we honor and we respect.
Posted by Democracy at 10:29 PM