“Humble Heroes, How The USS Nashville CL43 Fought WWII” was published almost 5 years ago. Yet, rarely does a week go by when I do not hear from a son, granddaughter or nephew of one of the Nashville crew. On occasion it is because the Humble Hero had recently passed away and the loved one is reaching out for information or giving thanks. At times, it is from someone not connected to the ship or crew and they are kind enough to take the time to write how much they enjoyed the book. But most often is when a loved one first becomes aware that there is a book about the USS Nashville. This happens frequently after the Humble Hero has passed and family is clearing out personal belongings. These cases are particularly moving and rewarding as I have been told it allows people to feel closer in some ways to each other and a father, grandfather or uncle as it may be.

One particular case exemplifies this and provides some insight as to why I feel I have received so much from others. A call came in one day from a woman who’s husband served aboard the Nashville. He had recently passed away and had left a very large family that included many grandchildren, a close family that always spent holidays together. That first Thanksgiving for them was very sad indeed, as you would expect. In fact, it was painful enough that they considered not having a big Christmas that year as they had always done. But this woman’s daughter started searching on the Internet for anything related to the USS Nashville. This is very common in such losses. In her searches, she came across the book. Again, this is common, but what happened next is not. She ordered and received the book and immediately opened it, not to the beginning but to the middle, a random page. On that page was a photograph of several unnamed Nashville crew on liberty in Australia. One of them was her grandfather. Imagine, just imagine how she felt, the loss, still oppressive and raw, and she sees that photo. That is what prompted the call from her widowed mother.

The woman told me that when they discovered the book and that page, they decided to go on with a large family Christmas that year and that each of the grandkids was given a gift of the book so they could know and remember what their grandfather did at one point in his life. The kids read parts of it aloud and shared the discovery at Christmas. The woman told me “Thank you, the book saved Christmas for us and made it very special for our family”. 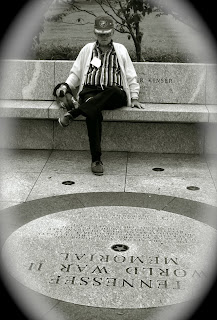 on but it is important to stop, think and feel those that went before us. An email just a few moments ago, advising me of another Nashviller passing this week, prompted me to do just that and write this entry.
Posted by Democracy at 2:19 PM