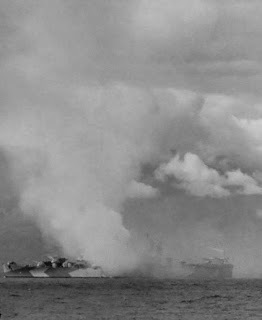 At some point it becomes difficult to continue, to write about an event.  At some point, you feel that no matter what and how you write, it will be inadequate in terms of justice to the significance of the event, to the degree of the horror, the pervasiveness of extreme heroism.  At such a point, it is best to simply state a few facts and trust that the humanity of the reader will be enough.

On December 13, 1944, 68 years ago today, a Japanese plane armed with two bombs, piloted by a Kamikaze pilot of the 201st Air Group, Shimpu Attack Unit, Mabalact Airfield, Philippines, crashed into the Nashville at almost 500 miles an hour.

Impact, explosion of the bombs, explosions of the ready-ammo on deck, fires, all in seconds.  Some men’s bodies were instantly vaporized, some torn into two, three, four pieces by the blast or shrapnel, some shredded by hundreds of pieces of hot, small shrapnel, some burned instantly, some far too slowly.  190 men were wounded, 133 died.  Uncounted was the common acts of heroism, to save shipmates, to save the ship.  Men rushed through 70 foot flames, into exploding ammunition, to rescue crew-mates or fight fires.  Others stayed at their duty stations searching the sky for another Kamikaze while Nashville held her place in line.

I can tell you this, the look in the eyes of the crew that relayed this event to me was different than anything else I had seen from them.  Nothing was ever the same for the men of the Nashville.

List courtesy of William R. Parker, son of Nashville Marine PFC William L. Parker, who was wounded in the attack:

An even greater number of sailors were wounded and killed.

Posted by Democracy at 8:12 AM