This excerpt from the book was posted this day last year and I can not think of a reason not to repost today, 67 years to the day that a bomb-laden Kamikaze from Negros Island, Philippines forever altered the lives of the crew. A couple of men have called me today, a significant date in their lives. Many of the survivors still deal with injuries and trama almost 7 decades later. Casualties on a steel warhsip are particularly horrific with the ship itself becoming a dangerous weapon a steel, paint, ammunition and people are literally vaporized. Think for a moment of these brave men and the many others of that era and say thank you in whatever manner you may. 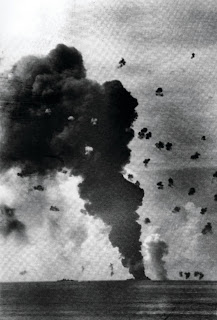 Posted by Democracy at 1:16 PM