Another piece of the Greatest Generation will fade away December 31st this year when the Pearl Harbor Survivors Association, founded in 1958, will dissolve. The current 2,700 members are well into their 80s and 90s and about 120 of them will attend the Pearl Harbor ceremonies this December 7. This year’s ceremonies will also be marked by the internment of two Pearl Harbor veterans, Vernon Olsen and Lee Soucy. Olsen will be interred with his 1,117 USS Arizona shipmates and Soucy with his on the USS Utah.

Time and age have obviously ravaged the generation that had 84,000 uniformed members in Hawaii that fateful day in 1941. But it has not been able to suppress the indomitable spirit of those storied men and women. Their children and grandchildren created and run the nearly 20 chapters of “The Sons and Daughters of Pearl Harbor Survivors”, a fitting and impressive tribute.

There is a similar, albeit, to date a small and informal tribute to the men who served aboard the Nashville. Known as “SONS” (Sons of Nashvillers), it was born of happenstance during the St. Louis Reunion of 2009 when Tim Bonnell (son of Charles Robert Bonnell), Tommy Hewell (son of Fred Clinton Hewell, Jr.) and I (son of George Leland Bustin) met for the first time. (pictured). All of our fathers had passed but the three of us immediately connected through their shared service, our love of our fathers and our commitment to preserving the legacy of a great ship. I am not sure who among us first coined the acronym SONS, but it is irrelevant. It is not about us, but about paying due tribute to our fathers and all the men of the USS Nashville and by extension, the Greatest Generation. In 2012 we will more formally create the organization and actively reach out to others connected with the crew. We will set up a process to preserve and pass on the many artifacts related to the Nashville when the founding SONS are gone. Recently, Tim Bonnell discovered that his long time pastor was a son of a Nashviller himself, a connection that had escaped both men for many years. In fact, their fathers were in the same division and most likely knew or knew of each other, as is true of all of our fathers. You can be sure there are many, many more such connections to be made.

It is imperative the story of the ship and the sacrifices of her crew remain alive and carried to future generations. Today, it is not unusual for college students and many other Americans to be ignorant of what December 7, 1941 was, what it means not only for America but it’s place in world history and how it continues to shape our country today. Be it from political correctness, benign neglect or simply ignorance, teaching this history has become rare in our education system. In time, that can be a bigger tragedy than the event itself. SONS will do our part to not let that happen. 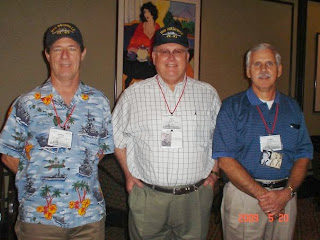 Posted by Democracy at 3:01 PM