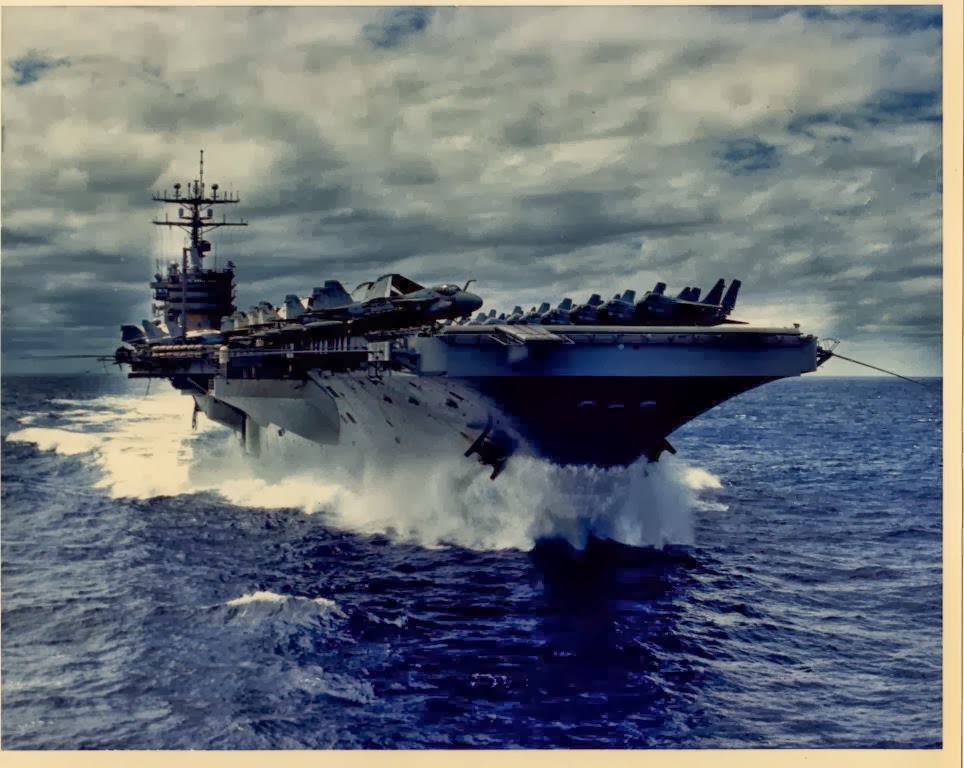 Did the Humble Heroes know their hat, their photos and their book would go to sea?  Could they have imagined that 69 years after their war ended, and a decade plus after most of them passed on, a small recognition of them and their ship would board a 100,000 ton aircraft carrier via a tail hook landing and spend 24 hours at sea, yet again?  I would think not.  But it happened.

For the second time in 13 months, I had the distinct privilege of being selected as part of a Navy program to host civilians aboard a ship at sea.  Selected by the Distinguished Visitors Program, I was part of a group of 15 writers, bloggers and social media executives that spent a phenomenal 24 hours aboard one of America’s most famous ships, USS Carl Vinson CVN70, the ship of Top Gun and the burial of Osama Bin Laden.  As I did with my Embark to the USS Spruance DDG111, I took the Nashville hat, the Humble Heroes book and a few photos of the Nashville crew

We spent several hours at Naval Air Station North Island in Coronado being briefed on naval aviation and what to expect for the next 24 hours, as intense, action packed, exhilarating and informative 24 hours as could possibly be anticipated.  Our expectations individually and collectively were high, the reality would blow them away.

We boarded one of the Navy's most reliable aircraft, the C2 Greyhound COD (Cargo Onboard Delivery), a 50 year old design.  Noisy, “greasy” in the words of the pilot, utilitarian, built for safety not comfort, with but two salad plate size windows, she was anything but glamorous.  We boarded by way of the tail ramp and entered a world of exposed wires, cables and well-worn functional seats…facing backwards.  Secured tightly by our three-point safety belts, our hands free since carrying anything lose like a camera would result in that object becoming a projectile during the tail hook landing, unable to communicate by voice due to the noise of the massive 8-blade turbojet props on the aircraft, we all smiled somewhat nervously and awaited our fate. 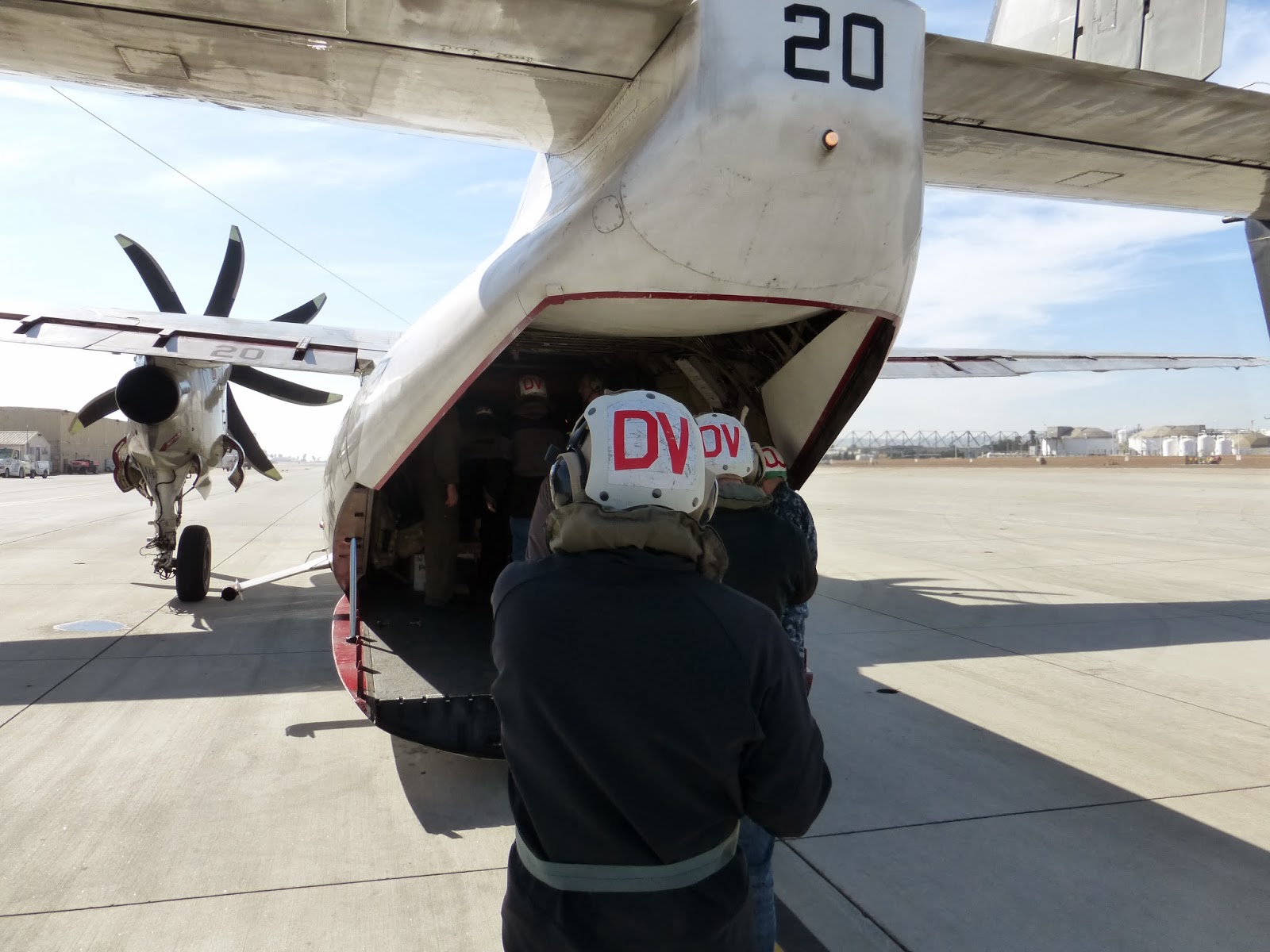 Our tail hook landing, touching down at 105 mph and coming to a complete stop within 2 seconds, in less than 350 feet, was an event exciting enough to elicit a cheer and applause.  But that was but the beginning of one sensory treat after another for the next 24 hours.

Immediately upon touchdown we taxied even as the wings began to fold up and soon the rear ramp opened, flooding the cramped and dark interior with brilliant sunlight and the teeth jarring noise of F-18 SuperHornets landing and catapulting off the ship just yards away.  One of the last to board, I was the first off, met by a helmet and goggle wearing Air Transport Officer emerging from the light.  He patted me on the shoulder, shook my hand and motioned for me to follow, as I did.  Buffeted by a 25 knot wind we all stepped off the flight deck onto a grated catwalk with the fast moving ocean visible 70 feet below and then up a ladder and suddenly, we were in the quiet, paneled stateroom of the Captain, strong hot coffee, warm fresh baked cookies and cool refreshing water on the table for us.

We were warmly welcomed by Executive Officer Captain Walter “Sarge” Slaughter and then the captain of the ship, Captain Kent “Torch” Whalen.  Their hospitality and transparency would be shared during our next 24 hours by every single crew we met, from the greenest Seaman fresh from boot camp to Rear Admiral David Steindl himself.  We did not feel the least like unwelcome guests they had to endure, but like friends and family they were glad to see, all the while they went about their remarkably busy and stressful jobs.

A modern US Navy carrier is, outside of an ICBM launching nuclear submarine, the most powerful ship in the world.  It can be at any location on the planet in 7 days, literally be underway for decades without refueling and deliver deadly, including nuclear, ordinance almost at will.  As one officer stated, “4 1/2 acres of sovereign American territory off your coast gives one a reason to pause and reflect”.  It does indeed.

We were enthralled by the power and technology of the ship and her weapons, including fighter jets, helicopters and missiles. I address those in other articles and posts.  But what was most impressive and most relevant to the crew, families and readers of this Humble Heroes Blog, were the crew.  There are over 5,000 people on the Carl Vinson when the Air Wing is aboard.  And while the ship is massive, it is still an ocean going machine where people fit in and around the ship structure, not the other way around.

Crew quarters are crowded, cramped and functional with bunks stacked 3 high, 20-120 crew to a room, each with a blue curtain to provide a minute perception of privacy. The crew, as always seems to be the case historically, is young, average age but 20 years.  To put that in perspective personally, I’ve been out of grad school 23 years and I believe my favorite baseball hat may be 20. 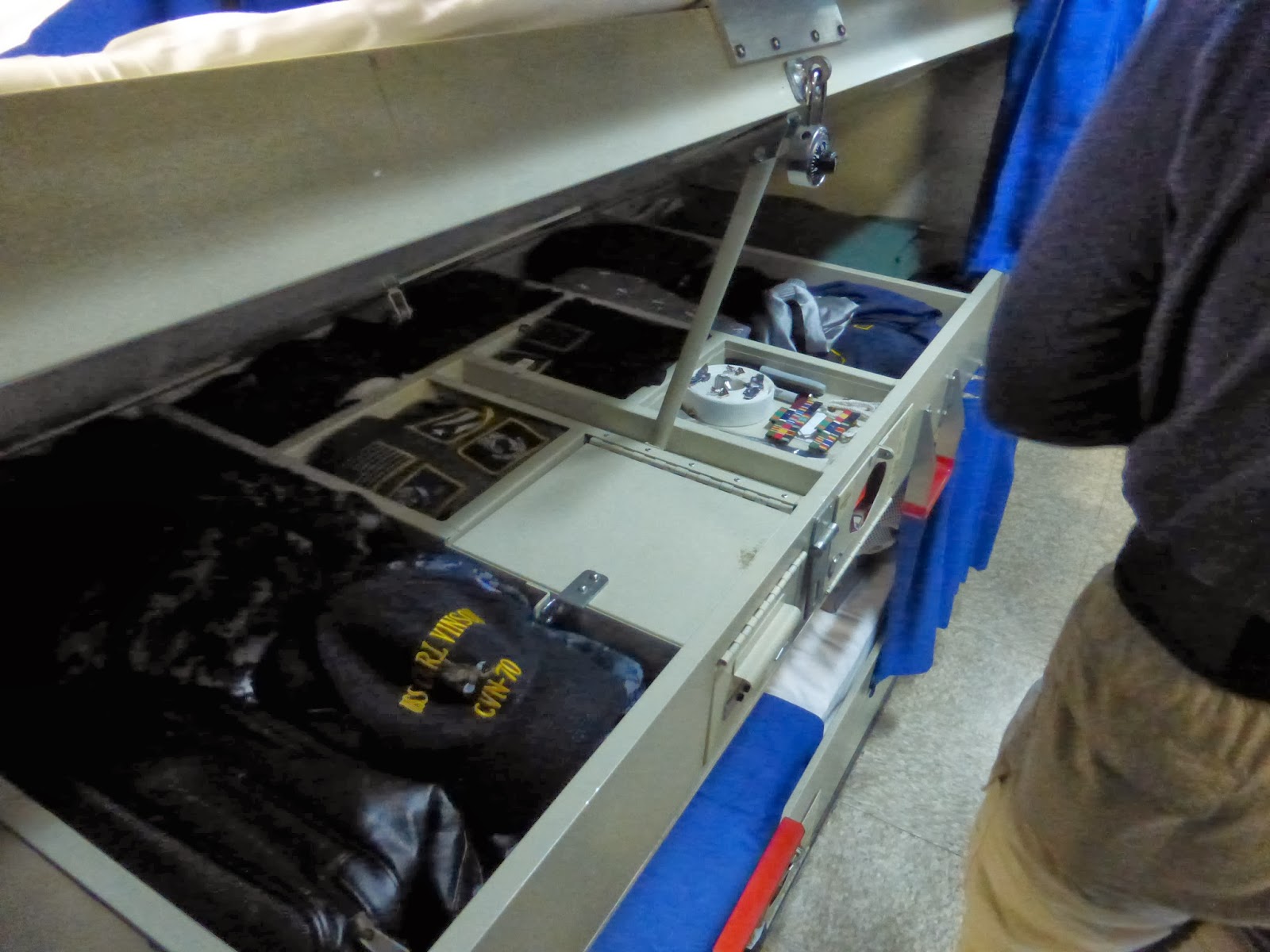 Over 40 new crew each week join the ship and each is graciously given 2 weeks of orientation before they are at their duty stations and responsible for their jobs and themselves.  It is a generous and effective methodology for introducing new crew, many just out of boot camp, to the overwhelming and intimidating operations of a modern American carrier.

The American military is an all-volunteer force.  Each volunteer has their own story and motivation for joining, their reasons ranging from wanting to see the world, get an education, and learn a trade to the most popular, patriotism.  Not one of the crew had to join the navy and work 18 hours a day 6-7 days a week and be deployed away from loved ones for 8-10 months at a time.  They chose this so remember that when someone questions the ability and commitment of America’s youth.

While we, as a society, are accustomed to seeing teenagers walking down the street with their eyes focused on their cell phones, these young men and women get but 15 minutes of internet time each day, if they are lucky enough to find an open computer.  And while we are used to seeing young people texting their friends who may be sitting next to them, the crew does not have cell phone coverage while at sea.

The crew of USS Nashville would find camaraderie and much in common with today's American sailor.  Like the Nashville crew, these sailors make great sacrifices on a daily basis, shoulder stressful responsibility, depend on each other for their own safety, and perform dangerous jobs under sometimes extremely adverse conditions. 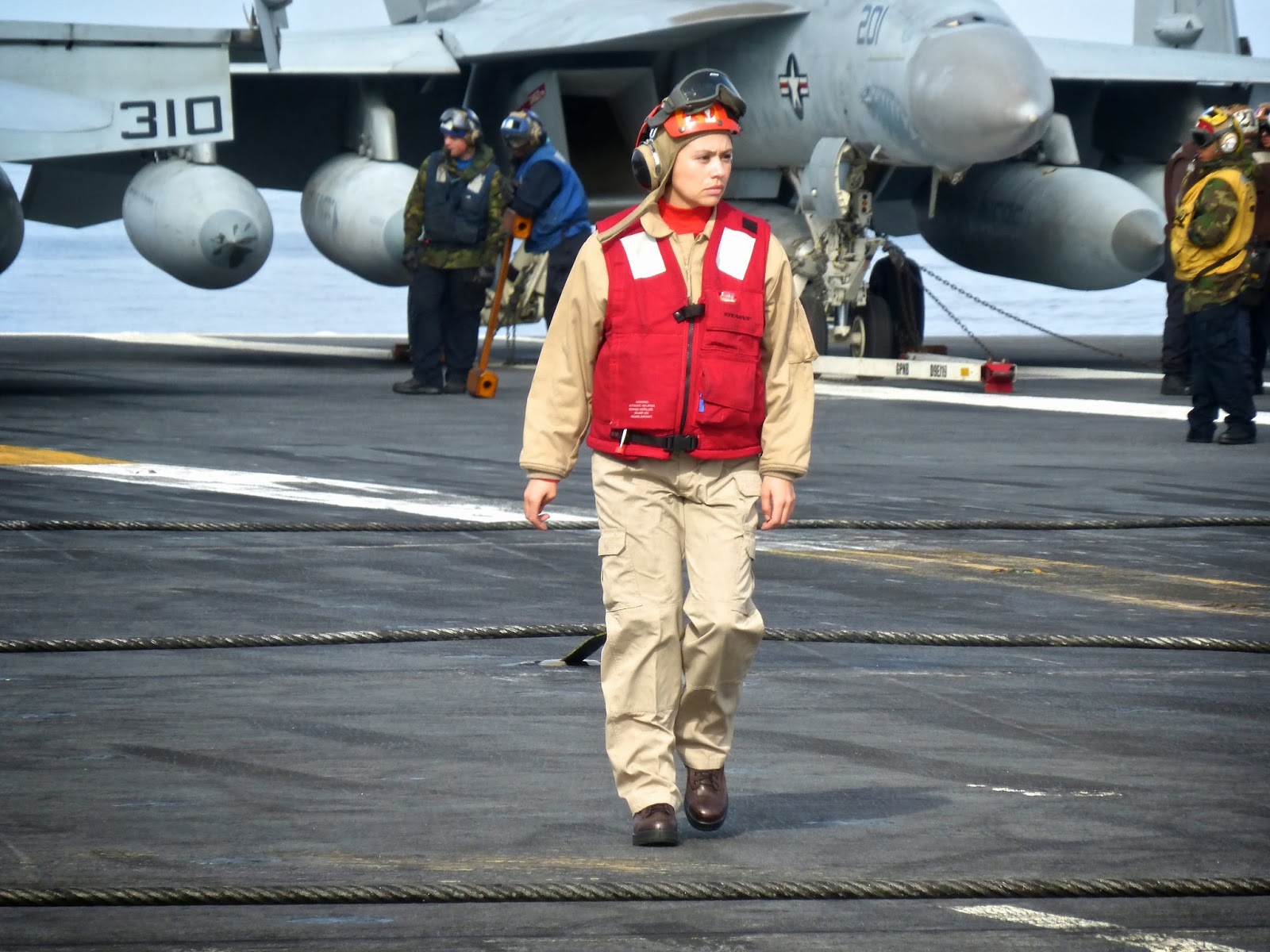 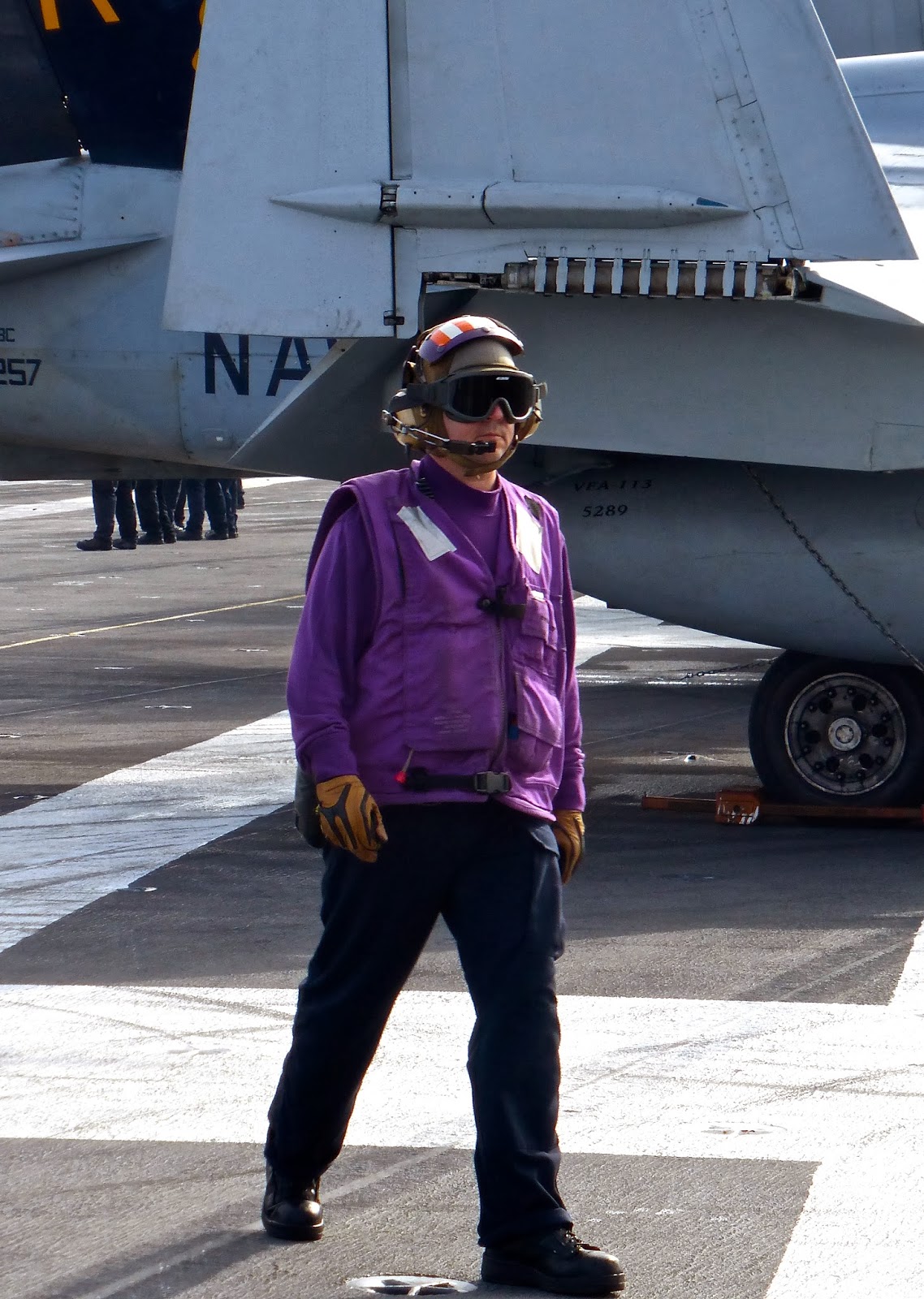 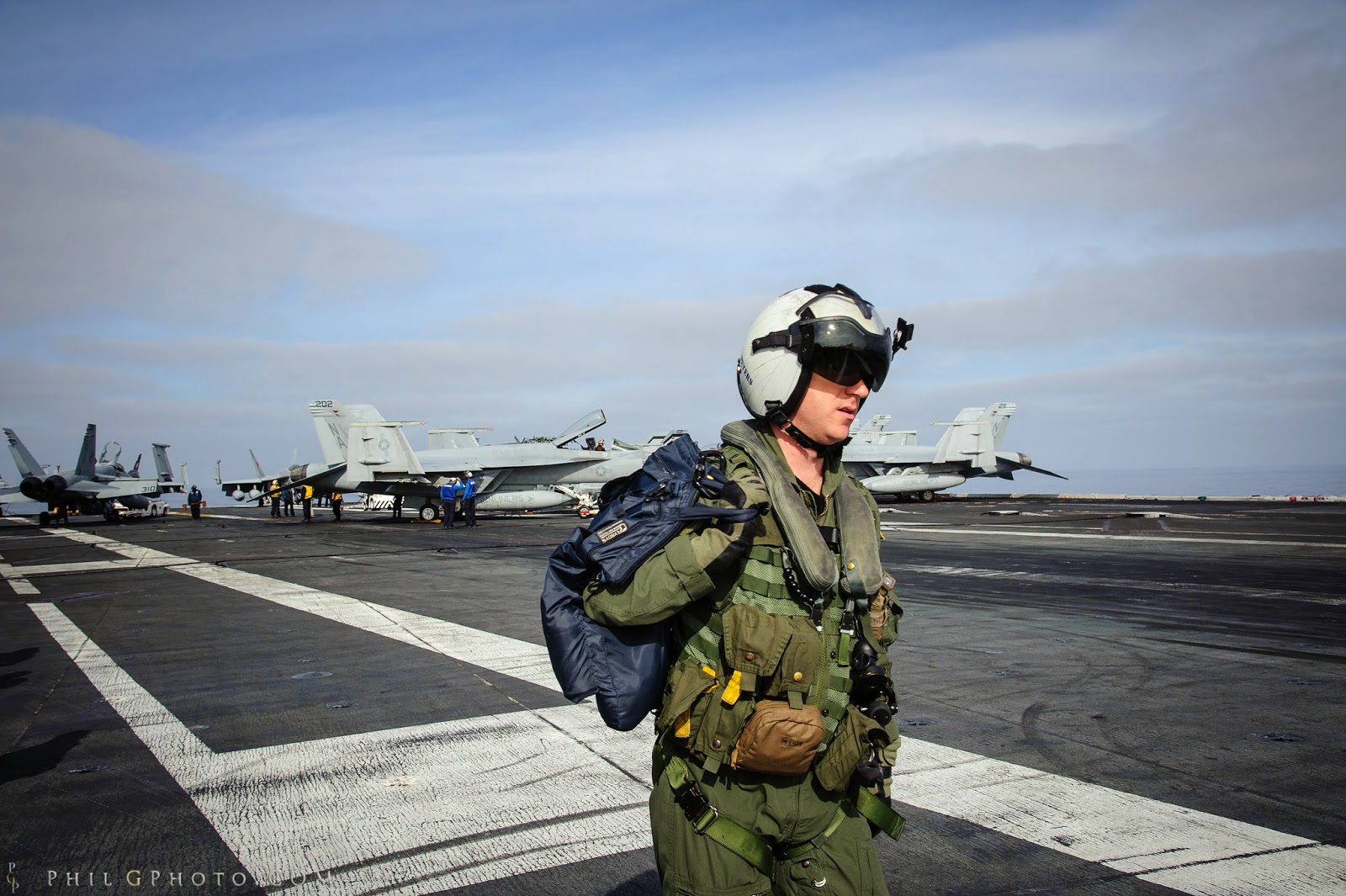 Pride, that is the word I think best describes them all.  Of course the pilots are full of pride, they know they are an elite group and have about the coolest job in America.  And the middle managers that really run a ship (or any organization), the Chief Petty Officers, take great pride in their job. But we also saw enormous pride from the mess staff that planned, prepared and served us our formal dinner that evening.  These very young kids were absolutely joyful with pride and when we applauded their job well done, not a one could refrain from sharing their beaming smiles.

Next on Deck, Part 2: Whiskey 291 Operations

A Word About The Embark Process
The nomination process can take from a few days to three years starting from the time of nomination to vetting by the Navy and finally selection and embarkation to a ship at sea.  Dennis Hall, founder of Avere Group LLC, made my embark possible via his nomination of me.  Dennis Hall initially submitted my nomination to the Deputy Public Affairs Officer for the Commander, Naval Air Forces – Pacific, US Pacific Fleet for the Distinguished Visitors  Program. #VinsonEmbark  #Averegroup

I was privileged to be part of group of talented writers and executives.  I highly recommend reading their blog posts on this phenomenal experience.  You may even want to read their other blog posts. 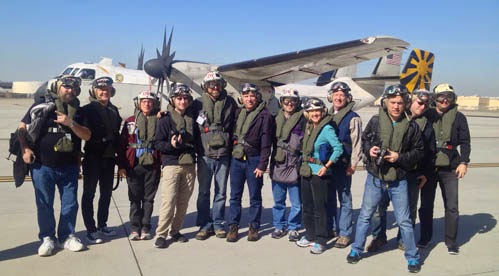 Clarity of Communication-Lessons on Management from the USS Carl Vinson

Night and Day: My Life vs. Life in the Navy

Posted by Democracy at 1:06 PM

Email ThisBlogThis!Share to TwitterShare to FacebookShare to Pinterest
Labels: Embarks on Navy Ships